Here’s my report on visiting FOSDEM in Brussels last Saturday. The “Free and Open Source Developer European Meeting” is basically a mix between a 10.000 geeks, Free/Open Source Software projects, enterprise solutions and a sense of community descending on the Universite Libre Bruxelles (ULB) for a weekend. I really like FOSDEM for the atmosphere, interesting talks and it’s of course close by. I usually go for a single day to check out what’s happening. The talks range from showcases of:

You can also view all the lectures via the video archive, but it wouldn’t be the same. 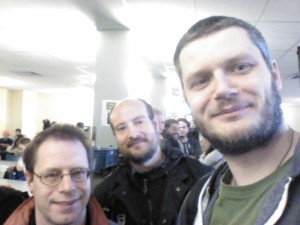 This year FOSDEM occurred on Saturday 30 and Sunday 31 January 2016. I went together with 4 other people from hackerspace TDvenlo (Tjeerd, Gijs, Harm, Panos and Me) The main observation of the event was that the event is getting quite packed for a weekend, but still is loads of fun. We needed to drive to Brussels at 07:00h from Venlo because the introduction already started at 09:30h. The opening used to occur an hour later and this year there were 28 DEVrooms and almost 700 talks. (On twitter @FOSDEM and #FOSDEM) View photos for #FOSDEM on twitter via this link.

FOSDEM has grown quite a lot the last couple of years. It used to be 5000 visitors, I think it’s now more than 10.000 over the whole weekend. Maybe it should scale to more days. But then the University of Brussels (ULB) would probably stop hosting the event. It’s a really old building, but with a lot of atmosphere. Really like a Belgian organisation would take care of it. The scene looks crummy, but the event is great. More on future visits later.

My favourite talks for the day that I was able to visit:

These where the talks that I visited and are worth going back for. However a lot of the most interesting rooms were occupied. It looks like ULB is becoming too small for doing this and keeping the event free/gratis. However, if you look beyond the talks and go for the ambiance, people, stands, obscure projects and lighting talks. It really is a one of a kind event.

Glad to see the security room at @fosdem it's really full. So many open source developers caring about #security 🙂 pic.twitter.com/0LdAxfW0vS

The number of concurrent tracks at #fosdem is just ridiculous: pic.twitter.com/FQBQCkj2Ri

I really like the smaller devrooms from time to time. You really see the interaction between people that normally meet online and now meet face to face. People don’t start calling each other names. Occasionally you have funny interesting interaction with the audience, because it’s half the project in a single room.

The stands were also great to visit. The Owncloud stand showed the fruits of their collaboration with Western Digital in making a home made kit using a Raspberry Pi and a 2.5″ 1TB drive for your own home server. There was also a stand with a home built laptop using 3D printed parts, and Allwiner A10 or A20 mainboard and cardboard.

One of the other things I missed was Bitcoin and Blockchains. Only 1 of the 700 lectures mentioned bitcoin. On the other hand, decentralization, databases, high availability, privacy and communication were represented at FOSDEM a plenty. (View my presentation on the subject for more info.) With 10 billion USD pouring into Bitcoin and Blockchains, I think this will catch FOSDEM’s attention next year.

The main tracks are also cool, if they have an interesting topic and a great speaker. FOSDEM occasionally drops the ball by putting a mediocre presenter in front of 1500 people or the audio is crap. Which I think wastes a lot time for a lot people. The opening speech on Systemd was quite interesting, but the audio was too quiet. Which made it quite hard to follow the presentation. The talks by Andrew Tanenbaum and Eben Moglen from a couple of years ago remain engraved inside my memory. (Now I see on Twitter, that Stallman was present at FOSDEM. Too bad that I’ve missed it.) But FOSDEM shows that Open Source software is doing really well, growing and can do everything.

To accommodate the growth of FOSDEM and optimize our experience, this will probably become our strategy for visiting next year. Go to the devrooms that make FOSDEM great, enjoy yourself with other people and watch the rest on video. So that basically means go to the main tracks, obscure devrooms, the bar and the stands. Also try to avoid the material that you work with on a day to day basis. That makes sure that you learn new stuff. Sometimes I’m thinking: “We used to do it this way 10 years ago.” When the videos are online, organize a viewing event with the local hackerspace with some of the other people there.

All in all, we had a blast of a time at FOSDEM. We will surely visit next time in 2017.

In the @Mattereum world trade will not destroy the world because everybody will be able to see everything, and by everybody I mean *judges* who can impose penalties when somebody promises something is fair trade when it was actually made in a sweatshop, or lies about a CO2 offset

The problem with using money to govern society is that a lot of very evil people became very rich by doing unethical things.

It doesn’t guarantee rule by the worst but it certainly encourages it.

We have a very serious problem right now in our mainstreamed white supremacist conservative institutions, and there are a lot of people who really do not want the inconvenience of giving a shit about it.

And, false equivalence is the lifeblood of practiced indifference.

A killer murdered 10 Black people in cold blood; his rationale was a white supremacist myth that has been strategically mainstreamed by modern conservative propaganda and is now believed by a plurality of Republicans.

Author Yascha Mounk believes a variant of replacement theory has moved into the mainstream and is being celebrated by people on both the left and right https://cnn.it/3MIG29m