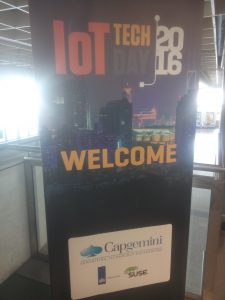 Better late than never. This a report on IoT Tech Day from 2016.  I wrote this in May 2016, but I’ve been busy with personal matters for the last 2 years. So, before visiting the successor of IoT Tech Day called TEQNATION coming April, here is the report I was writing in 2016.

Usually I go to the more mechatronic or High Tech industry conventions during the year. Due to recent job changes and also wanting to see something new, I went to Iot Tech Day 2016 in Jaarbeurs Utrecht this year.  IoT stands for Internet of Things. Nowadays I more see it as: “A system of systems combined with big data to deliver a more granular experience.”
Think of it as Uber, AirBnb and Amazon tied together and the computer knows what you would like to do and arranges everything.  This convention took place on April 14th 2016 and was organised by the Dutch Java User Group and did an excellent job. The used Twitter hashtag was #IotTechDay.

My main goal for this day was to see if any of the hype behind the “Internet of things” also had some substance and where all this would be going?

It’s best to split this question in 2 parts. The application part and how much money will be burned with this.  Everything will become connected, I have no doubt about that. Will that mean people will be constantly bombarded with advertisements and notifications to upgrade? Will big mega corporations in cooperation with governments control our lives? Or will everything remain a big incompatible mess and we end up with ‘talkie the toaster’? Or finally, people will forgo all the bullshit and reclaim their own independence for both on the network and in real life.

Another aspect remains. IoT is currently at the top of the Gartner Hype Cycle and the hype train runs quite fast and loud at this moment. Churning out internet connected items that are bricked once the back-end stops working.  Botnets performing DDOS attacks using hacked connected devices.
During the dot com bubble, mountains of gold were promised and we would be doing everything over the internet during the 00’s. Of course most of the people weren’t ready for that and we got the dot com crash instead. Eventually the bubble and crash made sure there was enough talent (programmers) around with spare time to create the web 2.0. (Facebook, Twitter, Reddit, Amazon, Google, et al) Will the industry invest mountains of VC money and then waste a lot of it and we wait for everyone to recover or does everyone take a more pragmatic approach?

This report is split up in 3 parts. First how my day went, a list of keynotes and then my overall impressions.

How my day went

I arrived at the event around 10 o’clock. Unfortunately I missed the first 2 keynotes. One of them being the launch of the “Things network”. It basically means the application of LoRaWAN around the Amsterdam area. Which provides low powered, wireless internet connectivity of max 50 kbs using only 20 base stations.  Since everyone was at the keynotes, the event floor was quite empty and I walked by the booths that were there. The booths mainly provided the following: 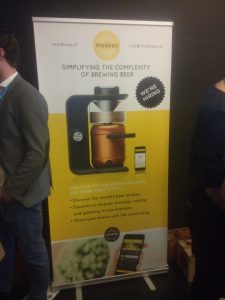 Most of the companies I talked still wonder where IoT will go. Instead they made a real good piece of technology or supplying first class services to enable IoT.
Which led me to advice some stand holder to look up a different stand in the hall. Because their products could work together with the product of the neighbours. Those stand holders only had to actually leave their booth and walk 10 meters to move forward. The landscape in IoT land still leaves a lot to be discovered. Especially for the suppliers of IoT.

Next to the booths and talk there people could attend a lot of hackaton’s for all kinds of technologies. Mostly with a lot of hardware, raspberry Pi’s and a lot of connectivity.

(This section is still a bit vague because I hadn’t started on it yet. You can find the 2016 schedule here and here.  But I will make the best of it based on my notes and photo’s.) Here are the most memorable keynotes or at least descriptions of those:

The keynotes and talks showed the IoT remains a mixed bag for now.  Machines have been connected since forever, the services will become better integrated and in the future everybody will be able to program their own  swarm of robots. I found the picture on the right in an article that shows the biggest oppurtunities for IoT. The article makes clear that a lot of IoT will not become visible to consumers, but to companies and government instead.

It seems that everyone really gets excited on what they can build with all the building blocks that are available. But what we exactly will build is still unknown.

The pieces of the puzzle are there. Now we still need to build a puzzle.

So the main focus is not the technology but getting ideas to market, while making them successful. Also there was a healthy sceptical attitude during the event.

“Yes, we have great technology and can build anything. But don’t expect mountains of gold and we’ll have to figure things out along the way.”

Another thing I saw. Nobody is doing this alone. IoT is a system of system and they all need to talk to each other. This is new territory and companies work in partnerships using open protocols. Next to open protocols,   blockchain applications will also become huge in this area. If you want to hack it alone, you’ll be left in the dust way behind.

All in all a really interesting day with much content to think about.